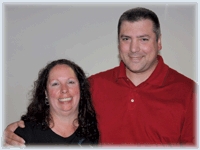 It was an average Monday night for Charlie, Nina and their beloved beagles, Chester and Daisy…until Charlie began to have a seizure. Nina immediately called 911. An ambulance brought Charlie to the hospital where an MRI discovered a Meningioma brain tumor. It was a series of whirlwind events which resulted in a 5 ½ hour surgery.

On April 1, 2009, Charlie was transferred to Mount Sinai for rehabilitation. He had strength and balance issues; primarily on the left side of his body. For two weeks, Charlie worked closely with Todd Clayton, Physical Therapist and Melissa Dusza, Occupational Therapist.

The care and attention Nina and Charlie received at Mount Sinai meant a great deal to them. So much so, they decided to do something special to show their appreciation. In honor of the staff at Mount Sinai, specifically 4 East Unit, Nina and Charlie donated funds to purchase video equipment to assist others in their recovery.

Charlie is back to work now on a full-time basis. He is still on anti-seizure medicine, won’t be able to drive until next March and probably won’t climb any ladders in the near future, but Charlie is doing just great! He and Nina will celebrate their good fortune and 11 years of marriage by taking a cruise to Bermuda.

Thanks, Charlie and Nina…your gift will provide support to other patients for many years to come.