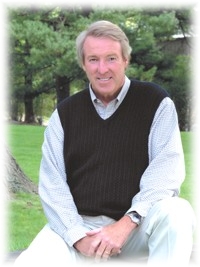 Art Byrne does recall a few things about the accident in Vermont. He says he was skiing pretty fast, as he usually did – maybe 30 miles per hour. He remembers the terrain had flattened out just before he made the big turn off hard-packed snow and headed toward the lift. He recalls some fresh snow and moguls he couldn't quite make out. But the last thing he can bring to mind from that December day in 1998 was the moment his leg twisted violently, his ski was wrenched off and he began to pitch forward. Just before he hit the ground, there may have been a fleeting sense of disbelief, but Art doesn’t really know.

“I've been pretty athletic my whole life,” he explains. “When I got out of college, I took up skiing and became kind of addicted. All the different places I lived, I tried to ski as much as I could. It was just part of me. I never so much as twisted an ankle or hurt anything skiing over all those years.”

This first accident was catastrophic. Art’s head broke his fall. “When you go down straight on your head like that, you don’t even have a chance to put your hands up in front of you,” he says. So when he slammed into the ground, his neck snapped. “I was basically dead on the mountain,” he states simply.

What came next Art knows only as a story told to him. As it happened, one of the next skiers down the mountain was a doctor; by the time he got to the body lying crumpled by the side of the trail, Art was unconscious and no longer breathing. Although the doctor had never administered CPR during his fifteen years of medical practice, he gave Art Byrne CPR on the mountain and kept the injured skier alive until the ski patrol could take over.

“Maybe it was the luck of the Irish,” Art shrugs.

Being kept alive seemed the extent of his luck for a while. Art’s condition worsened during the week he was in intensive care at the community hospital nearby. He had broken his neck and one leg, along with several ribs. There was a severe concussion and neck contusions that caused his throat to swell nearly shut. When Art arrived at the Vermont hospital, his left arm and shoulder were functioning; within a few days, his left arm was useless because of nerve damage attendant to the fractured vertebrae in his neck.

By the end of a week, he could hardly breathe. His injuries were extensive and complicated. “It became clear that I was more than they could handle,” he recalls.

With help from his business associates at Wiremold (the West Hartford company for which he has been president since 1991), he was airlifted home to Saint Francis. Orthopedist Dr. Anthony Spinella had made a commitment to put together a team of doctors to treat Art. “I got there around five o'clock at night,” Art recalls vividly. “It was amazing. Right away, I must have seen five or six doctors. Dr. Spinella, Dr. Lange and several other specialists came just to have an initial look-see and set up some tests. I spent until about midnight having x-rays, CAT scans, MRIs. When I arrived at Saint Francis, I just felt safe. They took really good care of me.”

The Saint Francis medical team set to work. The fractured vertebrae were confirmed; knee surgery performed; broken ribs strapped; an eye patch applied. Art’s broken leg was encased in a toe-to-hip cast. Then, except for brief periods of time when he was helped from bed to sit in a chair, the lifelong sports enthusiast lay in bed for three long weeks.

“I’d been in the hospital a lot of times in the past with many sports injuries – mostly ice hockey,” says the man who attended Boston College on a hockey scholarship. “I was used to being in the hospital, but I’d never been down for more than a few days. I had never been that incapacitated before.”

Because of his extensive injuries, he could barely roll from one side of the bed to the other. So when he was told it was time to go to The Rehabilitation Hospital, Art was skeptical.

“I wasn’t sure if this was a good thing or not, because I hadn’t been able to move,” he points out. He was even less sure once he was transferred and Michele Dery walked in for Art’s first physical therapy session. “She was a tiny gal – about five-foot-one or two,” recalls the six-foot-three executive. “She looked at me and said, 'Well, I thought today we'd just go for a walk.'”

Art Byrne laughs when he tells the story. “I thought she was nuts," he confesses. “Just go for a walk? It took three people to get me out of bed! She could have said, 'We're going rock climbing.' That would have been just as stupid to me." Michele was resolute and Art acquiesced. Art was wheeled down to a gym where parallel bars awaited.

Art continues his account, “She took me over to these parallel bars. Maybe they were thirty feet long, but to me it seemed like a hundred yards. She said, 'Look – here are the rules. You can put full weight on your good leg. You can only put fifty percent weight on your right arm, as much weight as you want on your left arm. And on the cast – the doctor says to put as much weight on it as you can stand. That's up to you. Now I want to see you walk down to the end of these parallel bars.'"

Art Byrne concluded that the woman was crazy. He had sustained multiple injuries, lacked depth perception or much of a sense of balance, and had to be propped up between the bars. Still, he decided to give it a shot. “I started walking, and walked without much hesitation down to the end of these parallel bars. I got to the end, and I couldn't believe it. I didn't know what to say. I couldn't believe that I did it – and I couldn't believe that she expected me to do it." That afternoon, Michele took him to repeat the exercise, this time using only one bar. The result? Once more, Art rambled on down to the end of the bars.

Art realized Michele knew exactly what she was doing. “That's probably the most amazing thing that ever happened to me," he asserts. “How did she know that I could do that? I didn't think I had a chance of doing anything like that." From that point on, whatever Michele said they were going to do, he did. "I was willing to try everything. My attitude was, They're working with me to get better and I'm going to be as fully recovered as I possibly can. I thought they were saints. It was amazing what they were doing." There were trips to the gym several times a day, training to navigate stairs, exercise classes, a car to climb in and out of, a kitchen to practice cooking and cleaning up. (Art made a batch of brownies for the nurses.)

“The Hospital was really well equipped for preparing you to be out in society again and back to life," Art says. Even so, he had doubts about going home. “I had been in the Hospital about six weeks. And I was going home to live alone. I didn't really think I could function well enough to do that."

As a “final exam," a staff member drove several rehabilitation patients to Westfarms Mall for dinner and shopping, an outing Art thought a bit dicey. “It was cold," he reports. “I had crutches and the leg brace, the neck brace and the eye patch; there was a guy in a walker; a guy in a wheelchair; another guy who had broken his neck in a car accident. It was a pretty motley group of characters."

Art passed the test. Finally, before he was released from the Hospital, a physical therapist and an occupational therapist accompanied him to his house. Under their watchful eyes, he navigated his stairs and tried out his furniture. They went through every room looking for hazards or special equipment he might need. In February, Art went home to Avon. He returned to work a few months later.

Three years later, Art Byrne sees a physical therapist twice a week and works out in his home gym every day. "I probably won't ever get back all the functions I had before," he points out, "but I'm a whole lot better. I credit the care that I got to the team that Dr. Spinella put together. Without Saint Francis, I could have been in a whole different situation, with a whole different outlook on life. Saint Francis probably made the biggest change in my life that anybody could have."

Deeply grateful for the care he received at Saint Francis, Art made a very substantial gift to the Hospital in 2000. But for Art, that's only a beginning, and he wants to do more.

"I can continue to give Saint Francis money," he says, "and I've actually put the Hospital in my will. So, if something happens to me, Saint Francis gets taken care of anyway. But I think there's a bigger gift I can give." Art goes on to explain about Kaizen, the system of process management or lean thinking he brought to Wiremold and applied with spectacular results. Kaizen is a methodology to improve every process to get the most from human and material resources.

“The gains are astronomical," he says, pointing out that improving systems and paperwork at the Hospital would help free more time for nurses to care for patients and for doctors to practice medicine - which is what they and their patients want them to do. Art offered to help, the administration of Saint Francis was interested, and the first Kaizen has already been held.

"Hospitals have difficult circumstances – everybody is squeezing the health care dollar, so you have to run the business better. That's what I'd like to contribute. Then I'll know I've really given something back," Art concludes.